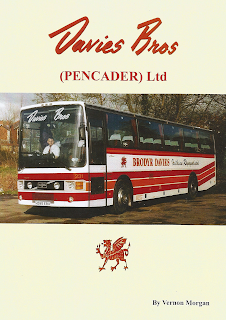 For a number of years, Davies Bros were the largest family owned passenger vehicle operator in Wales, running a fleet of 85 buses and coaches, shared between three operating centres, Pencader, Carmarthen and Trimsaran. They operated numerous local services, express services, school and contract services, private hire, day tours, and holiday tours, which extended to all parts of Great Britain and Europe. 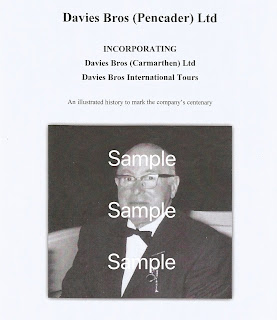 The humble beginnings of this well renowned family concern began in 1919, when William John Davies, the founder of Davies Brothers, joined his father in a car hire business operating from the family home ‘Blossom Lodge’, in the north Carmarthenshire village of New Inn, near Pencader. W J Davies became a chauffeur at the early age of 17, and six months later, bought his own motor car and started his own car hire business, which expanded to include the first bus in 1925. The first regular bus service started in October 1925, with an un-licenced service between Llandyssul and Lampeter, and in March 1926, he purchased Daniel Jones of Abergwili’s half share of the Carmarthen to Lampeter route - a route shared with Evans & Jones of Carmarthen.  Four years later, Evans & Jones’ share of the service was secured, together with the share of new operator on the route, David Lewis, of Cross Hands. This gave W J Davies exclusive possession of the Carmarthen to Lampeter route, and at the same time, W J Davies’ younger brother Daniel, officially joined the business to form a partnership which became known as Davies Brothers. 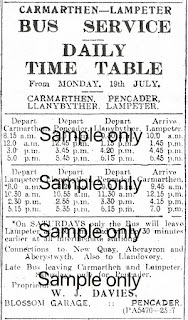 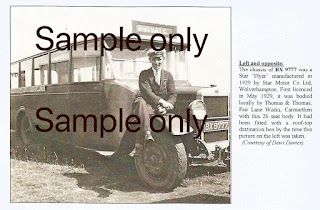 In 1938, the business moved from New Inn to new premises built at Pencader village, appropriately named Blossom Garage, but the business only moderately expanded due to the wartime hostilities.
The partnership between the two brothers ended in 1948, with W J Davies continuing the business single handed until 1958, when the limited company Davies Bros (Pencader) Ltd was registered. By that time, W J Davies’ only son John Dewi Davies had joined the business, and took full control as Managing Director upon his father’s death in 1972. Under Dewi’s control, the business rapidly expanded. 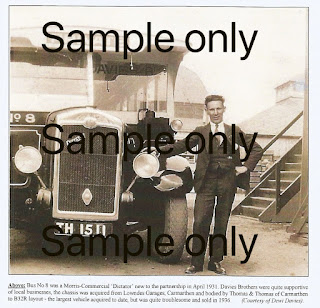 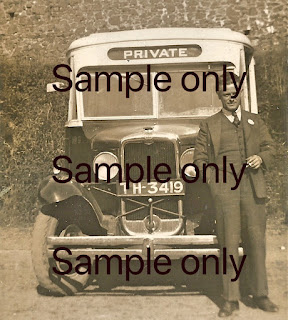 In April 1978, the old established business of Daniel Jones & Sons, Carmarthen was absorbed, and an associate company, registered as Davies Bros (Carmarthen) Ltd., was formed to control the Carmarthen business. Eighteen months later a programme of British and Continental tours were set up by the mother company to form the beginning of ‘Davies Bros International Tours’, with holidays that were second to none. In 1981, the one vehicle business of H D Williams, Penygroes was absorbed and in 1983, the businesses of J D Phillips, Newcastle-Emlyn, T M Thomas, Porthyrhyd and W R Davies (Red & Green), New Inn were acquired. 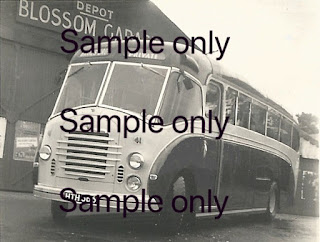 The largest company takeover took place in June 1988, when another old established business, Samuel Eynon & Sons, Trimsaran was acquired together with 25 vehicles, 32 licences and the premises. Six months later the six vehicle business of T A Jones, Llanfynydd was absorbed into the associate Carmarthen company, and finally in August 1989, the six licences of D G Davies (Gwalia) Llanybydder were swallowed up.

Throughout their existence Davies Bros had gained a tremendous reputation from the travelling public, but the much loved company, with a name that had become a household word in south-west Wales, suffered serious financial difficulties in 1999, which consequently led management to request the appointment of receivers to place the business into administrative receivership and liquidation.

This 300 page publication gives a succinct history of the business which has previously never been told. Illustrated with 440 photographs and other informative memorabilia covering the period, it’s been produced to celebrate the 100th anniversary of the company, a fitting tribute to the Davies family and their devoted staff.