The name of J. James & sons Ltd., Ammanford was synonymous with a high quality reputable omnibus service in the Amman, Gwendraeth and Swansea Valleys. Founder of the business, John James first became involved with public transport in 1900 when he purchased a mews at Ammanford, diversifying from his grocery and provision merchants business at Wind Street, Ammanford. Operating horse drawn traps and brakes, he became a posting master; his clientele were the best-known commercial travellers in South Wales. Goods were also carried, and a successful undertaking business carried out.

Moving on to motor vehicles in 1912, James became Ammanford’s first bus operator. Inaugurating a service to Pantyffynnon and Brynamman, they successfully competed against a passenger railway, and literally fought off numerous ambitious competitors. Securing regular clientele the business expanded rapidly to include a motor repair garage along with a dealership for cars, vans and tyres.

Also included is the historic 6-week Ammanford bus strike and riot of 1935, and the turbulent history of the notorious Jones Bros., omnibus company known as ‘Brynteg’ from Upper Tumble near Llanelli. Brynteg were once Carmarthenshire’s largest independent bus operator; a company absorbed by James in the 1930’s.

Illustrated with 112 photographs*, and other informative memorabilia covering the period, the book is a limited edition to commemorate the 50th anniversary of the revolutionary Leyland ‘Atlantean’ double decker bus, (the first in the world entered service with James in December 1958).

Sadly, the much loved company, with a name that become a household word in the West Wales mining communities, was absorbed by The South Wales Transport Company in 1962, ending a fine story of enterprise and achievement.

The book is a fitting tribute to the memory of a well-respected Ammanford family, at one time Carmarthenshire’s largest public service vehicle operator, running 54 buses on 21 services to Neath, Swansea, Llanelli, Burry Port, Lampeter and Aberystwyth.

A review of the book can be found online for the South Wales Guardian. 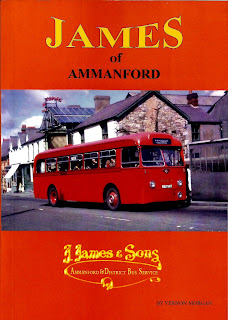 SAMPLE
(from the Introduction)
INTRODUCTION

For the reader, who may not be familiar with the area, we start the story with a brief history of Ammanford, which is situated in the Amman Valley district of rural East Carmarthenshire.


Previously known as Cross Inn, it was a village well known to weary travellers in the by gone days of stage coach and mail coach travel.  Travellers frequently used the village staging post called the ‘Cross Inn Hotel’ for refreshments, and if necessary, a change of horses.  The village had been named ‘Cross Inn’ after its location; a name derived from ‘cross-ing’ – the crossing point of two important South Wales coaching routes, and the crossing of the river ‘Amman’, which happened to be the county boundary between Carmarthenshire and neighbouring Glamorganshire. The river ‘Amman’ crossing, in those days, was made by means of a ‘ford’ (a crossing through the river bed), saving travellers some 20 miles on a journey between West Wales and Neath, or beyond.


With a population of around 200 in the early 1800’s, the village inhabitants had earned their living mainly from farming and coal mining, until the Industrial Revolution took place changing the village scene virtually overnight.  There were numerous heavy industries opening up across South Wales producing iron, steel, copper, tinplate, bricks etc., which demanded huge quantities of coal.  The whole Amman Valley area, having massive reserves of top quality anthracite coal, soon had numerous collieries constructed, and working to full capacity, producing the coal required.  Transportation of the coal was by means of an elaborate rail network set up in South Wales, linking all parts of the country.


Within a short space of time, these railways began carrying passengers and goods, after a large goods depot was constructed one mile from Cross Inn at Pantyffynnon Railway Station (Pantyffynnon Junction).  At this location, trains from North Wales and the Midlands to Swansea; operated by the London & North Western Railway Co., (L.N.W.R.), connected with local Amman Valley trains running to Brynamman; operated by the Great Western Railway Co., (G.W.R.).


The Industrial Revolution, however, brought with it a huge influx of people into the area, brought in specifically to work the community’s numerous collieries. This inevitably created rapid growth to the village of Cross Inn, and neighbouring Amman Valley villages.


In November 1880, however, the village inhabitants, unhappy with the name ‘Cross Inn’, held an important and historical meeting, at which they unanimously decided to rename the village.  Adopting the name of AMMANFORD, it was an appropriate description of the village at the time, another name derived from its ‘famous’ river crossing ‘Amman-ford’ as mentioned earlier.


Over the next 20 years, Ammanford village rapidly expanded, becoming a market town for the Amman Valley, with the population increasing to just under 6,000 at the beginning of the 20th century.  The collieries soon became Ammanford’s largest employer, and in fact, Ammanford’s wealth and prosperity came from the ‘black gold’ mined in the community.

John James, the pioneer of public transport in Ammanford, was born at Llywel, Breconshire in 1863.  Llywel was a small agricultural village situated on the main West Wales to London mail coach route, known then as highway number 40, which eventually became designated trunk road A40.

At the age of 14 he left the sleepy Breconshire village to begin his working career as a labourer at Swansea Docks.  Moving on from the docks he entered the grocery trade, and at the age of 21, became manager of a business owned by Messrs. Thomas & Evans (of Corona soft drinks fame) at Treherbert, Glamorganshire.

Returning to the grocery trade in Swansea, John James met Elizabeth Ann Fletcher, a butcher’s daughter, and eventually married her in December 1888.  It was his marriage to Miss Fletcher that brought him to Ammanford, where he opened his own grocery and provision merchants business at the Golden Eagle Stores, 16 Wind Street, Ammanford.  This was opposite his mother-in-law’s coffee tavern at 15 Wind Street (previously the butcher’s shop owned by the Fletcher family).

His establishment could be regarded as a village store as he stocked china, earthenware goods, ironmongery and collier’s oil, in addition to other commodities.  He also provided a home delivery service for the provisions with his horse and cart, and then began door-to-door selling of salt, for which he became known locally as James-y-halen (James the salt).

Salt was a much used commodity in those far off days before the invention of fridges or freezers. Commonly used in butter making, salt was also widely used as a preservative for pork and for curing ham and bacon by many people who “bred” and killed their own pigs in back garden pigsties.

However, eleven years later in October 1900, the James family moved from the Golden Eagle Stores to new larger premises approximately 200 metres away at Bancyrhin on the Ammanford to Llandilo road.  Their new home, ‘Brynderwen’ a double fronted house with lean-to cottage had great potential with its huge back garden, stables and outbuildings. From here, John James opened a ‘mews’ called ‘Brynderwen Mews’, situated only 80 metres from the famous village cross roads and Cross Inn Hotel.

Continuing with the provision merchants business, he then began a haulage business with his horse and cart, and subsequently conducted a very extensive business as posting master.

However, as the community expanded, John James’ business equally expanded, firstly with the carriage of goods and later by carrying mail and passengers.  Hauling goods by horse and cart or flat wagons, commonly known as ‘gamboes’, passengers were carried in horse-drawn wagonettes, dogcarts, traps and brakes for all occasions including weddings.  Family picnics and parties were also catered for, with outings to Craig-y-nos Castle, Carreg Cennen Castle, Dryslwyn Castle, Llygad Llwchwr, Llynyfan reservoir and other places of historical and geological interest in the neighbourhood.  Additionally, Mr. James bought a horse-drawn ‘Shillibeer’ hearse and started a funeral business.

Meanwhile, in the early 1900’s, Ammanford received its Town status and all the town streets were given names by the Ammanford council.  John James’ premises Brynderwen Mews then became number 25 College Street, and the lean-to cottage, number 23

In 1910, John James ventured into a separate business that had no connection with the Mews.  Forming a partnership with local haulier, David Evans, they had plans drawn up in March 1910 to build a roller skating rink at Margaret Street, Ammanford.  Two years later they submitted another plan to the Ammanford council to alter the building into a cinema and roller-skating rink complex.

The partnership however, dissolved after a very short time and the building was sold as a going concern to Mr. J. R. Pooles of Edinburgh, from whence it was known as ‘Pooles’ Cinema.