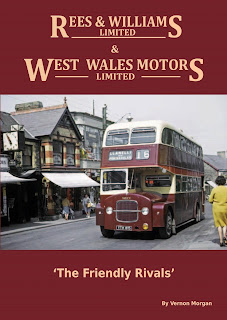 The convoluted history of ‘The Friendly Rivals’, Rees & Williams, and West Wales Motors, can only be told together, due to their close alliance and extraordinary relationship between the shareholders.

The humble beginnings of Rees & Williams can be traced back to 1913, when Lewis Llewelyn Rees, and his nephew David John Rees, both coal miners at Pantyffynnon Colliery, started a taxi business at Pontardulais Rd, Tycroes. The colliery manager arranged their shifts so that there was always someone available to drive the taxi, and when the business prospered in 1916, they left the colliery to focus on their transport business, which expanded to include haulage and motor vehicle repair garage. 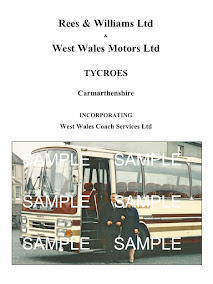 Another local collier, C.B. Williams joined them in their business venture in 1920, from whence it became known as ‘Rees & Williams’. Their first omnibus arrived in 1920, and the company was registered in 1926.

C.B. Williams left the Rees & Williams concern in 1928, and formed a syndicate to establish West Wales Motors Ltd, initially at Llanelli, but retained his shareholding at Rees & Williams.

West Wales Motors ran services that were common to Rees & Williams, with co-ordinated timetables and inter-availability of return and season tickets. 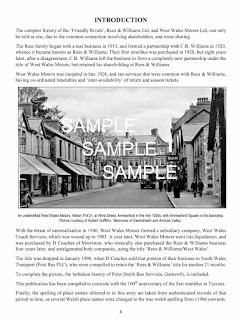 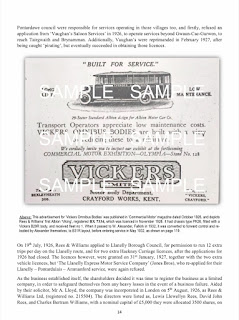 Amalgamation of both concerns was considered, but negotiations continually fell through.

With the threat of nationalisation in post war times, West Wales Motors formed a subsidiary company, West Wales Coach Services Ltd, in 1946, in order to safeguard themselves in the event of losing their stage services to nationalisation.

In 1977, West Wales Motors absorbed two services from ‘Pathlin Ltd’, a company ‘set up’ by the notorious Peter Smith Bus Services, Garnswllt, which is also included in this publication.

West Wales Coach Services Ltd was wound up in 1983, and West Wales Motors were absorbed by ‘D Coaches Ltd’, Morriston, Swansea in 1984, who also purchased the Rees & Williams business in 1987, finally amalgamating both companies, with the title ‘Rees & Williams/West Wales.

The title was dropped in 1996, when First Bus PLC absorbed that part of ‘D Coaches’ business, but were compelled to retain the ‘Rees & Williams’ title for two years.

This 250 page publication gives a succinct history of the businesses, which has previously never been told. Illustrated with over 350 photographs and other informative memorabilia covering the period, it has been produced to celebrate the 100th anniversary of the first bus service in Tycroes.