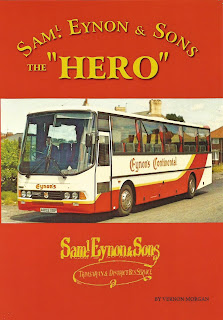 The name of Samuel Eynon & Sons, Trimsaran, was synonymous with a high quality reputable omnibus service in the Gwendraeth Valley district of east Carmarthenshire, South Wales.


Founder of the business, Samuel Eynon, first became involved with public transport in 1917 when he purchased his first motor car a second-hand American ‘Studebaker’, which he used initially as an un-licenced ‘taxi’ to ferry local Trimsaran people into the nearby town of Llanelli. Retaining his job as an engine winder-man at the Trimsaran Colliery, other members of his large family assisted with the driving. The Colliery manager arranged their shifts so that there was always one family member available to drive the ‘taxi’ and later the first omnibus.

It can truly be said that Samuel Eynon was the ‘Pioneer’ of road passenger transport in the village of Trimsaran, and was called ‘The Hero’ for inaugurating the community’s first omnibus service, a logo he applied to his first charabanc in 1920.

His three sons and two daughters joined the expanding business when they came of age and together they literally fought off other ambitious competitors on the Trimsaran – Llanelli road.


Eynon’s built up a tremendous reputation throughout their existence, management and staff alike treated their customers like family or friends in the close-knit Gwendraeth Valley community.

However, de-regulation brought about by the Tory Government was the final straw for the already financially unstable company. Immediately after de-regulation in August 1986, the South Wales Transport Company vigorously challenged them on their lucrative Trimsaran and Carway routes with brand new Mercedes-Benz minibuses, charging lower fares and running just 5 minutes in front of Eynon’s.

Sadly, this brought the company to its knees, and the well-renowned and much loved company, with a name that had become a household word in the east Carmarthenshire (east Dyfed) communities, was sold to another Carmarthenshire (Dyfed) independent operator Davies Brothers of Pencader in June 1988, ending a fine story of enterprise and achievement.

This limited edition 240 page book is illustrated with over 300 photographs and other informative memorabilia covering the period, and has been produced to celebrate the 100th anniversary of the company, which was at one time Carmarthenshire’s largest independent PCV operator operating 35 vehicles. It’s a fitting tribute to the Eynon family and their devoted staff, and a succinct history of the business which has previously never been told.